Well it was the London Marathon weekend this weekend just gone, and like many others I was unfortunate not to get a place. You see I'm still in two minds about London. It holds probably my proudest moment memory in my running career to date and will probably always will as it was my first marathon.

Now comparing it to Paris, I recently did I can safely say I prefer the way Paris starts compared to the crammed London start. Paris had far more starters at 42,000 odd compared to London at 38,000 yet Paris you don't end up stopping starting, tripping over people. Paris offers far more in the water stations an what not. However there is still something about London. Paris is amazing, but London there is something about it. The course is far from pretty but I think the crowds, the atmosphere and the runners make it what it is. That's where I think I am a little gutted not to have been running it getting amongst it all, sucking in that great atmosphere. Even with being ill I would've dragged myself across that line once more!

With the ballot system changing for next year, which means more people will be able to enter the ballot I think the likely hood of getting a place for next year will be slimmer.

So I woke up switched on the TV to watch my friends running around London. I was itching to run in an event. I didn't care what either. Luckily there was a small local event being put on near by for charity. Knowing a few members from the club were also running it. I too was going to enter it.

Event 12 was the Trevi 5k Fun Run at Saltram House in Plymouth. The event was organised by 3 students from Plymouth University as part of their sports developent degree. The charity the proceeds was going to is the Trevi House. They look after woman and children with drug and alcohol issues.

Registration started at 10am, so I had to record the rest of the marathon to watch when I got home. As it was on National Trust land, the event got lots of support from the NT. I can tell you something, the NT are really starting to push their name in sport. Through local events to parkruns across the UK they really are making a good name in local grass root sports. 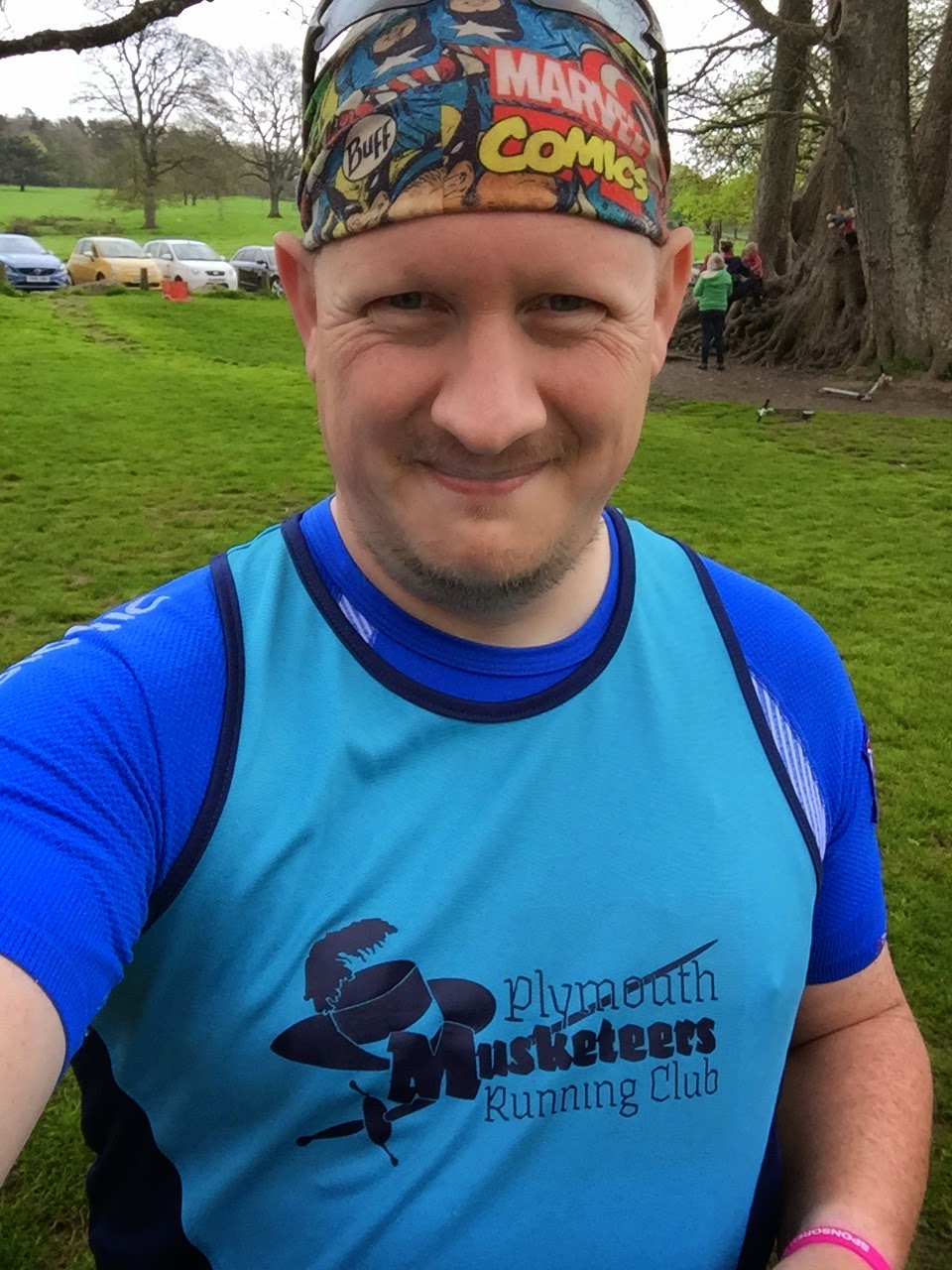 The weather was good for us, and as I registered it started to get a little busy with all the runners turning up. They had a qualified Zumba instructor there who put on a quick warm up session and get the runners ready for the start. It wasn't a packed field but it was more than the organisers had expected. Runners, walkers, children and adults all lined up at the start. I lined up and there were a fair few members from my running club on the start line. We made up about 20% of the runners so it was good for both the club and the event. One of my fellow club members didn't want to run by herself as she was unsure of the route so on the start line I said I would accompany her.

At 10.30amthe run started and off flew the ruuners. Me and Bee who I was keeping company took off, and I just kept to her pace to which she felt comfortable. Which was good especially as I was still not fully recovered yet from illness.  The route was slightly different to the standard 5k route used for monthly summer 5k races. It didn't have the two hills included which was a pleasant surprise. It took us down from the House to the estuary along the waterfront. Before turning back towards the house. The route took a de tour right along a trail path before eventually turning back along the path before regaining the route to the finish line at the house.

I was keeping an eye on the pace and we were doing sub 10 minute pace, Bee was doing well and working hard, until she had to stop to do up her shoe laces. I'm so glad I have locking laces on my shoes I never have to worry about them coming undone.

As we headed back on the trail path back towards the path leading to the finish I asked Bee what her PB was. "36 minutes ish" was her reply. "You might hate me after this then in a good way" I said as our pace was well under her PB.

We headed up the path also known as Saltram Hill towards the finish. I increased the pace slightly, encouraging Bee to oo the same. I began to push her towards the end until we finished. We crossed the line and she had a new PB of 30 minutes and 14 seconds. If we hadn't stopped for her shoe laces she would've been sub 30 minutes. She ran really well though. 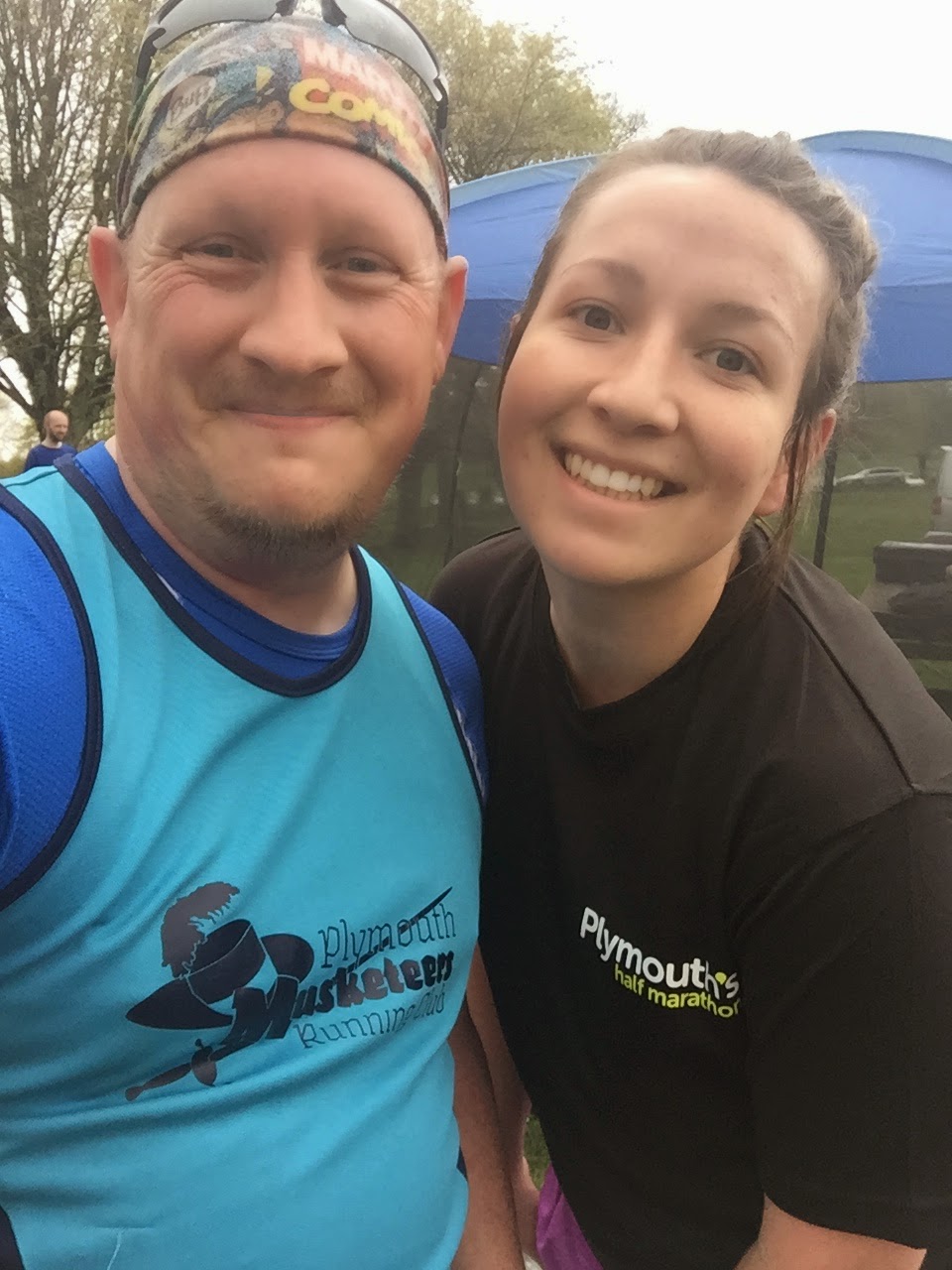 As we crossed the finish lines we given goody bags, which was a pleasant surprise as I wasn't expecting one from this type of event. To be honest it was a better goody bag than the one we got from the Plymouth Half marathon.

It wasn't until after the event I started to have a coughing fit, so in someways I was pleased, as I'm starting to recover.

The event was a really nice little local event for all abilities. It was well organised and well marshaled too. With your £5 entry you got entry in to raffle for some sport shop vouchers, a good goody bag, a well organised event and all the proceeds went to charity. What wasn't there to like about it? The 3 students did a great job. Well done!

The second event happened by chance. I received a message on Facebook which happened to end up in my Other messages box which I rarely checked to be honest. I use my mobile so don't see them through that, I just happen to be on the main website.

The message was from a member of one of the running groups I'm on. She has organised a Virtual 5k charity event and knowing I was doing 37 events asked if I wanted to do it. What is a virtual event?

Well all I had to do was pay £5 towards the charity, then by 30th April run 5k upload my information from Garmin (or any other form of tracking information) and I get a medal sent to me. It's as easy as that.

As I was already planning on running with my Sweatshop Running Community friends the next day it was a simple thing for me to do. So I donated my £5 and entered the Virtual 5k.

Event 13 of 37 The Big 50 Virtual 5k run. Monday night I turn up to the Sweatshop Running Community run. it's been a few weeks since I last ran with this lot mainly due to working or being traveling back from another event. It was good to catch up with everyone. Now they lay on 3 routes for people to choose from 3k, 5k or 7k. I for this event chose the 5k route. 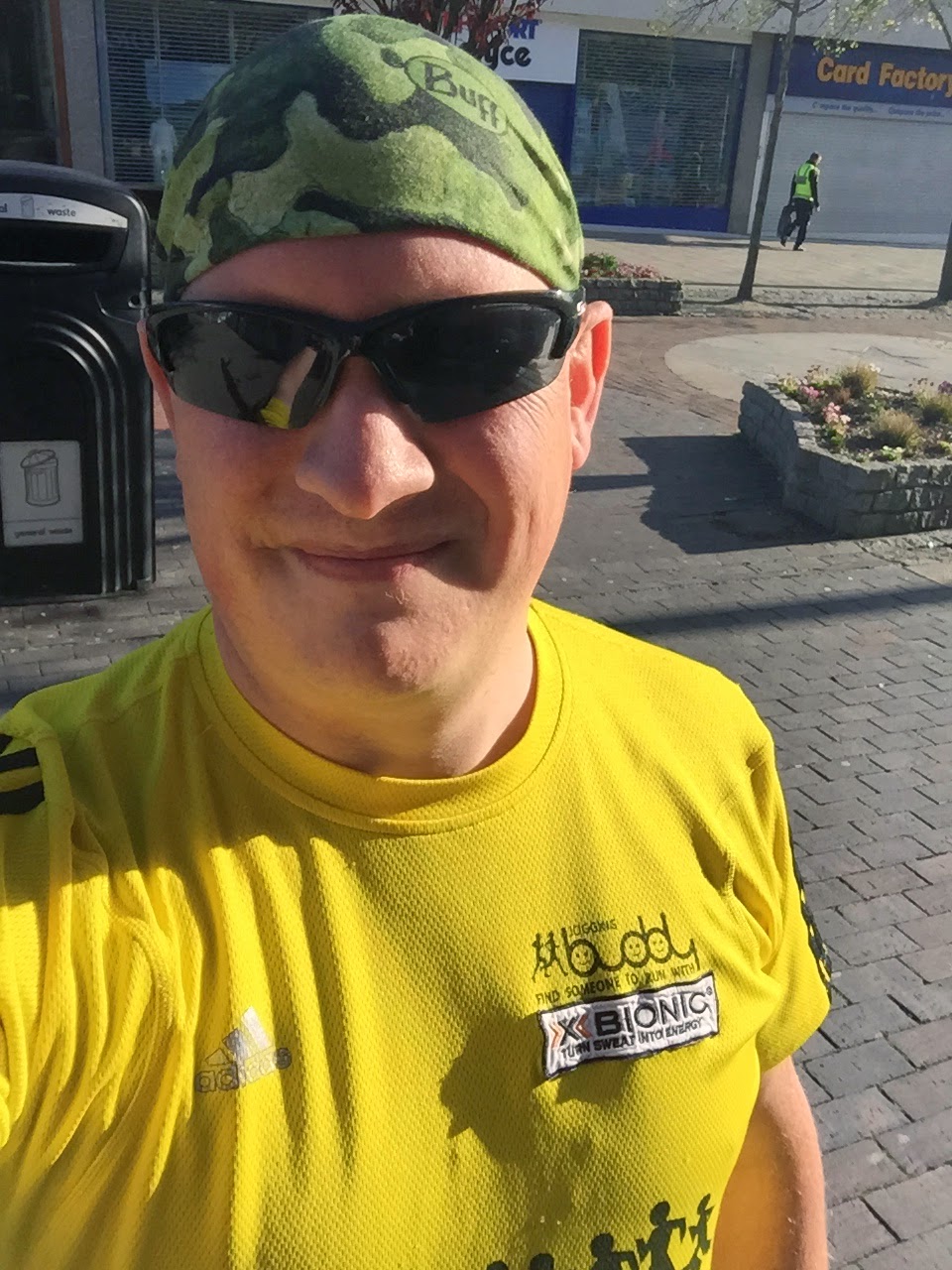 After a quick welcome chat by Ben from Sweatshop, we were off. I wasn't planning on running with anyone, as everyone has different distances in mind or pace. Luckily though, I ended up running with a couple of friends of mine Jackie and Jon. Jon however was leaving us to do the 7k route, but Jackie stayed with me. It was nice to have company, we had a good chat, as we made our way through Central Park near the Plymouth Argyle Football Club. I wanted to put in a reasonable run tonight, to see how my body would hold up.

Even with the hills, I didn't want to slow too much. I kept a comfortable pace still just about able to chat but just. The weather was very good, considering it was raining earlier it had brighten and warmed up nicely.

Jackie and myself soon made it back to the Sweatshop and I had ran 5k in 26 minutes and 59 seconds. Not my fastest 5k time with stands at just over 22 minutes, but with recovering from illness (I only had one small coughing bout during run but a big one afterwards) and not really going for it, I was pretty happy with the time. 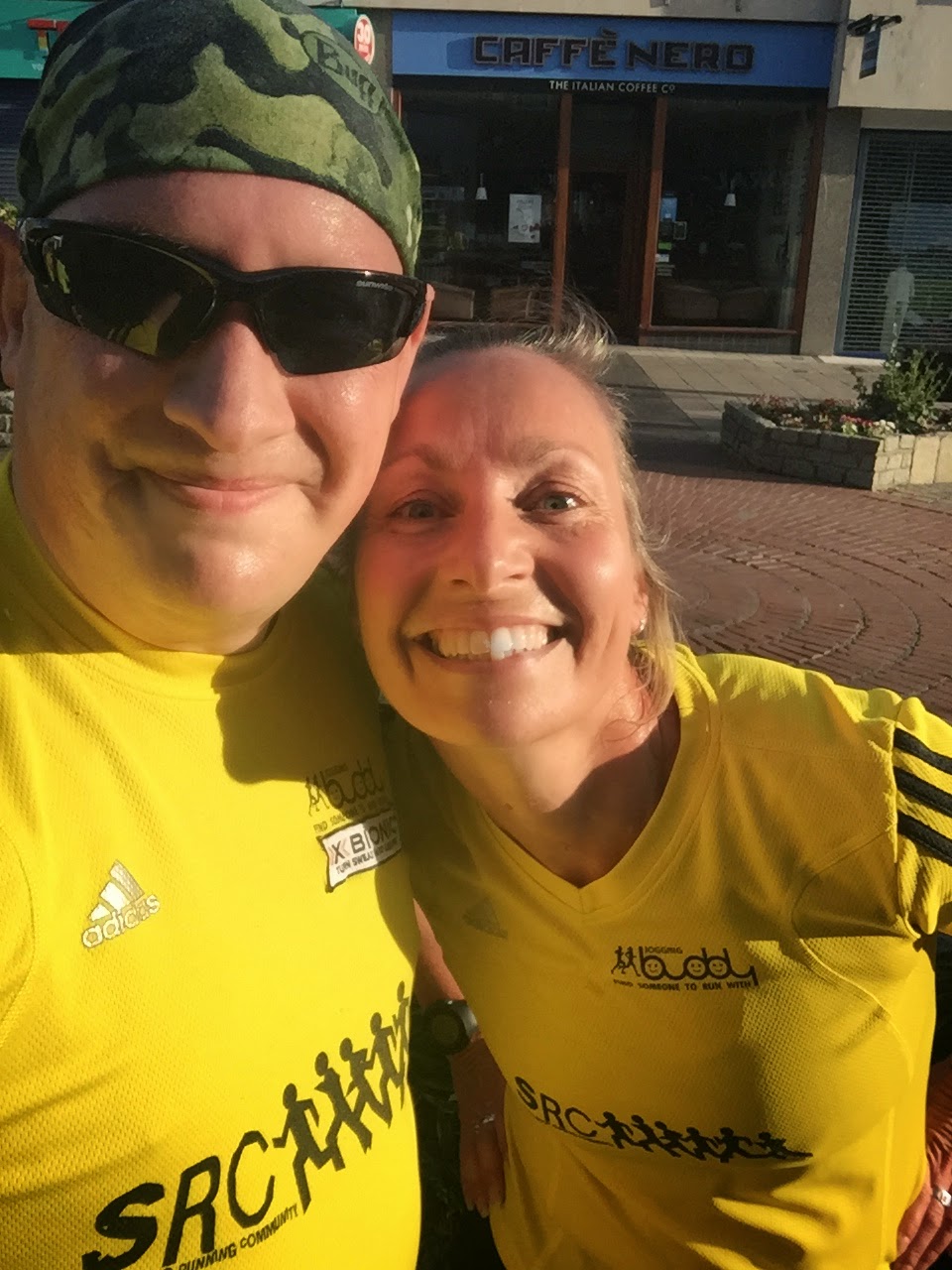 I sent my info to the organiser, and due to some runners unable to run the event but still donated the money, even Jackie who kept me company will get a medal. Looking forward to receiving them soon.

So despite not being able to run in the London Marathon, my weekend wasn't a complete waste. Having also my blood test results back as well Monday morning, with good news and the Doctor telling me I am on the recovery path now I am pretty happy.

Now with having to work this weekend coming I doubt I will get any more events in before HOPE24 (24 hour ultra) on the9th/10th May. Hopefully I will have fully recovered by then to give my best shot.

Thank you for reading
Owain
My Justgiving Page