So another busy week really, with the Beach 10K earlier in the week and two events this weekend!

I had to pop up to Shawbury, Shropshire to visit the in laws and celebrate a family member's 40th Wedding Anniversary. Knowing how busy with work and a well earnt family holiday in June was going to be, I had to fit in some more events before the end of the month.

Shawbury which is just outside Shrewbury in Shropshire has a parkrun every Saturday. This is one I've already done before with my brother in law.

I won't go into too much detail about the event as I've already covered it before, however as I was running it alone (my brother in law Paul chickened out) I was able to run it for myself. I was going to set out comfortably and see how things go.

The weather was perfect, and I set off. First mile was nice at around 8 min 30 mile pace. The next mile I picked up the pace again with around 8.15 min/mile pace and finish strong but not even blowing with 7.47 min/mile pace.

Without giving it large I finished in 25 min 27 secs without blowing out of my arse. 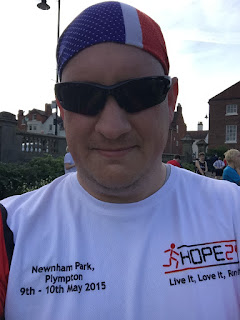 The next morning meant I had to get up at 4.30am for the drive to Bristol so I could run in another event on the way home. Leaving at 5am allowed me enough time to get especially as they had closed roads of some made getting to parking a bit more of a pain.

I entered this not long after I knew I had to go up country. It cost me £27 to enter, which for a 10K isn't the cheapest but it isn't that bad when you look at what is provided. about a week or so before the race, they sent me the race info pack which included my disposable timing chip, bib number, race info and bagage tag.


I arrive at the park & ride which was the better option, than try to park in the city centre, although it was a bit of a nightmare with road closures getting there and arrived at the start just after 8am. According to the race info booklet the pen for waive 1 for white and red bib numbers opened at 8.30am. They lied like a hairy egg as they didn't let us in until 9.05am which only allowed 10 mins until the closure of the pen time. There was one other club member racing but alas I didn't see her before the race to get a club photo.

Eventually I made it to the start pen for the red numbers. We were on the right side of the start the white were on the left. They gave you your coloured number based on the estimated time you put down for finishing. White & Elite were on the left side of the start line, who were starting bang on 9.30am. We were going a few minutes after the white had started with the yellow and green in waive 2 heading off at 9.45am. There were about 12,000 entrants altogether so this 10K wasn't a little local event. It was the Run Britain's 3 race in it's Grand Prix series. There were some top names racing including the Cornish Maid Emma Stepto and a couple of Kenyans.
The race started and the Elite and white numbered runners were off. I was followed suit not long after and we headed outbound. The streets were full of supporters on either side of the route, where the atmosphere despite the over cast weather was great.

I felt my self taking off too fast down the first half mile. I hate doing that, and recently have been good not to. So I calmed down and settled into a comfortable pace.I was going to run comfortably and increase pace gently as I go along. I like a negative split and to finish strong. I enjoy events more that way compared to positive splits.

The route was pretty much flat with the odd slight incline here and there. It took you out towards the Clifton suspension bridge. As I got to 2 miles the elites already flying past the other way around 3/4 mile mark. They were shifting. We turned around at about 2 and 3/4 miles and soon hit a well stocked water station at 5k. Despite the a gentle spit of rain, the weather was still warm and sticky. I past through the short tunnel we came through on the out leg and the "Oggie Oggie Oggie" cheers rattle through the tunnel.

After the 5K I continued with the race plan and kept a comfortable pace going depsite slightly increasing it each mile.

Here are my splits:

As I entered back into the city centre the crowds and the atmosphere picked up again and lots of cheers were being given, I pulled over to the side as I ran and started giving as many high 5's to the children as possible. A lot had been standing out in the poor weather for a while now so wanted to give something back.

I  soon made the last turn and down the finish straight with a sprintish (not full sprint due to amount of runners) until I crossed the line in 53.24 which all not a PB it was a season's best without really trying. It was a bit of a walk back to Millenuim square, along the way you picked up the various finishers items.

The event was very well organised, well marshalled, great atmosphere and well you look into it, worth the entrance fee. You received a nice medal, water during and after the race, space blanket, tech t-shirt (Plymouth Half you had to pay £18 for one on top of entrance fee!), a good goody bag with the usual fliers and tit bit including coconut water (which isn't cheap in the shops). So another event and a recommendation for this mass entrant 10K

So that was event 19 & 20 of 37 which takes me over half way towards the target goal. Thank you for the continuing support as I type this I have raised currently just over £700 towards the £2,000 target.