Twas a blowy morning the sun barely up as I woke early in the morning of the Cousin Jack Classic, not a Cornish Maid could be heard.

I returned to my childhood home in 'Druth, so I ready to take on this 17.5 mile Cornish Coastal section of the South West Coastal Path (SWCP).

It was my first and probably only invitational entry to an event I've had in my relatively short running career. Boy I was going to make the most of it.

Knowing the area reasonably well I know they weren't joking and the fact it's part of the Arc of Attrition route I know it doesn't take prisoners.

The wife kindly offered to help out so using our van she became known as the "bag lady" as she was doing the baggage drop from the start to the finish. David the RD is a great supporter of what I do and has even run the whole of the last day of my last big adventure. So it was the least we can do by supporting him and his events.

Since we were helping with the bags it meant we had to be at the start early so picking up a friend via St Ives along the way we got to the start at 7.15am. The wind was strong down on the Cape, as we assisted Dave and his wife set up the start.

Soon runners were arriving and kit check/registration opened and people were processed. The weather was horrid, with heavy rain and gusty winds battering the Cape.

After a safety brief by David we were set off at 10am. It's nice to have a slightly later start to most events. It was a busy start on the coastal path for the first mile but after that we all soon to start spread our legs.

The course was split into two parts the first 11 miles with a cut off of 4 hours was a lot of up and downs and the second of just over 10K with a 3 hour cut off was full of oh my f@@king god!

Ample cut offs you are probably thinking and yes they're not stupidly nails to make but they still enough for runners to not make if they have a bad day especially in the first section.

The second part I lost a lot of time in, with more climbs, bouldering, knee deep bog made up of mud and animal shit. I really struggled with the boulders. I ain't going to lie, I found the last 10K part very tough and in most for me almost un runable. I learnt a lot from it to take forward but overall I was pleased. I went out to enjoy the course, and I bloody well did. I took in the scenery, took photo's, ran most of the way with two friends. I think one of the great things about this event is so many people I knew either were running it or were helping out!
After I crossed the beach and the final climb up the island to the finish, I was very proud of David and what he has achieved with this event. I was glad I ran it and even more honoured he gave me an invitational entry. Even so for the little price it was, 17.5 hard miles 3,927ft of climb was worth the medal, pint of cider, pasty, and good bag (some even had spot prizes in). When I look at some races and recently seeing a 10K costing £50 to enter, I glad I run these events and get more for the money!

Now for the kit I used, well I started with the waterproof coat I had (it was also mandatory) as it was cold, windy and pissing down, however eventually I stowed it and just ran in my X-Bionic kit, because the rain kept coming and going and when it wasn't raining despite the wind I was like a boil in a bag in the jacket. So I ran the majority in my "Trick" top, "Trick" Shorts and arm warmers from X-Bionic. They really did the job well. As I was carrying own nutrition was part of the mandatory kit, I used 600ml bottles x 2 filled with Berry Tailwind Nutrition to cover me for the duration. I didn't really need anything else and even though there were marshals out about every 3 or 4 miles with some water and some sweets etc I didn't need anything else.

Those marshals were brill though. Out there for a long time getting batter by the wind and every other weather, some in places you wouldn't expect them to be, showed how much people respected David and his event. 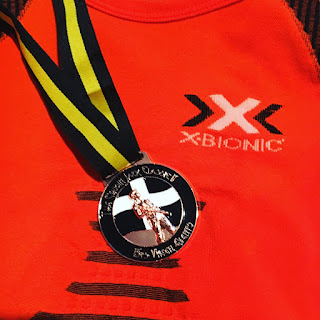 Overall it was bleedy brill! Thank you all for reading.