End of an Journey? Maybe For This Trip but Not the End of the Adventure

We waved goodbye to Gibraltar, our final stop of the 10 month deployment and made our way out of the Strait of Gibraltar and into the Atlantic Ocean. It's mad to think back to when we first came down this was at the beginning of February. I came down with Pneumonia, the Bay of Biscay was rougher than St Paul's in Bristol. Was that really 10 months ago?

Now as we made our way back up through the Bay of Biscay, there is a little swell enough to rock us to sleep at night but it's far from it's brutality it has often known to cause. We have some guests on board in the form of Parents and Children joining us for the trip home. Some have coped with the rocking others not so but I believe they still would've enjoyed the experience none the less being with their loved ones for so long. My son unfortunately was too young to come, but to be fair it means homecoming will be far more special.

As this trip comes to an end, so will my training on board. I continued to treadmill although easy runs due to the rolling of the ship, it makes you feel like your running up and down small hills often and it would be too easy to come off, if care wasn't taken.

The Thursday night before we came alongside was spent at the buoy in the Plymouth Sound. It's so close to home, the excitement is hard to maintain. You know the family are right there but still not close enough to touch. I'm not scared of showing my emotions to be fair, times have changed where man no longer should be scared of a tear or two. Homecoming is going to hit a lot of people hard I think. We've been lucky to have better technology on board to allow us to stay in touch more. When I first joined in 1997 there were few mobiles around, no emails and getting time to phone home at sea was hard due to the lack of phones on board that allowed you to do it. Now we have constant emails, wifi and phones (operationally dependent of course) which allows staying in touch so much easier and I believe this helps with maintaining the bond in the families. Ok the WiFi isn't the best we can just about send FB Messages or Whatsapp but it's more than we used to have and all currently that is needed.

I can safely say it's been good for me. I have had my moments of struggling being away, but with my running and being able to communicate with family and friends back home it's helped.

The day of homecoming arrived, everyone is up early for various reasons and it was time to get us back alongside. Over 1500 family and friends were expected to be on the Jetty waiting for us. The city of Plymouth saluting us from the Citadel with their cannons as we sailed past. It's a big day for the ship. If you went back to last December when during Operation Sea Training we were told " by the way your now deploying early next year for 5 months to the Med" and then 1 month in the deployment you get told "by the way we're extending you til 10 months in the Far East" we have traveled a long way and for a long time with very little time before hand to be prepared both physically and mentally.  Now it's over and we were finally back!

The following day at home was just about chilling out, nothing major but I was surprised in a nice way to catch up with some of my friends in the evening that came out to see me. It's amazing the little changes around the area you notice that others take for granted that have happened. Road layouts, shops closing, the list goes on.

Sunday was a day planned out by my son. He wanted a daddy and son day, no mummy as he says "Mummy has had me to her self for 10 months" So his plan was for me to run with him at our local Junior parkrun in Plymouth, lunch then cinema then tea then bowling.


The morning started with the Junior parkrun in Devonport, Plymouth. I've never run it before as it started up during my time away. It was one that had been talked about happening over the years and finally it's happened. It's a wonderful park and the course is a nice 2 lap course with a cheeky little hill to run twice for the kids.

We turned up and it was nice to see some of my running friends there with their children. My friends were either volunteering whilst their children ran or running with their children like I was. My boy said to me prior he wanted to beat his PB for the course, so that was our goal. Off we went when the run was started and made our way round, with my boy thanking all the Marshals as he went, giving them all high 5s along the way (this may have slowed him down)

He's grown up around parkrun since he was 3 years old when I first started myself. He continued  to run, and often saying he felt destroyed hehe. He was working hard, and all I was doing was giving him encouragement. He led the pace not me, I've never pushed him like that. I have never been a fan of pushy parenting. I rather he enjoyed it, than being forced.

He eventually finished and he smashed it. He took almost 2.5 mins off his previous PB. Did it help having me there? Possibly a bit of confidence for him, or he wanted to impress me with how much he's come on. Either way, he did it and he did it himself.

After we had finished, the boy went home in the car as I ran home, I needed to get my run in before the rest of our day continued. I have always tried my best to fit my training in and around my family rather than fitting the family in and around my running. It was also a good excuse for me to test out some of my new kit that arrived in the post prior to me coming home.


On first impressions the kit did very well, the top was comfortable, light, and felt good to run in. The shorts were fantastic, and loved the pockets on them. I liked the stitches design in all the garments. The jacket was what I was most impressed with. I wore it originally as I thought it was going to rain and because it was cold. However despite it not raining, I didn't end up over heating. I also didn't end up like a sweat bowl in it. One first use in no rain, it was pretty good. Looking forward to giving it a good run out when it rains, as this jacket will be my go to jacket for the AoA in Feb.

So that concludes my blog in my series of blogs from my travels around the world. I've still yet to have a look at my footage from the rock race yet, that will be something I will do over the next week during my time off and hopefully will be able to put a film together of some sort.

Thank you everyone who supported me and kept up with my travels whilst I was away. Thank you to Tailwind Nutrition UK for their continued support. I hope to continue being a trailblazer next year. Next year is going to be a good year I reckon.

So until the next blog!

The Cape Wrath Way trail is a well known trail, stretching from Fort William to the very tip of Cape Wrath its self finishing at the light h... 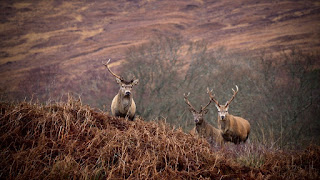