It's now November and 32 events out of the 37 already completed, it was time to complete some more and that leads me on to this blog.

Having to reduce the mileage down in my final events from ultras and marathons due to my current on going knee injury, I decided on ones no further than 10 miles at the most for the remainder. Having smashed out other smaller events since Equinox24, it was time for Event 32 of 37 the Plymouth 10K.

Due to issues, with the previous event organisers, (the same company that organises the half marathon) this 10K was cancelled earlier in the year. They put it down to not being allowed to expand it to take in more athletes to cover increasing costs, in my opinion on looking into it, and how they run the half marathon it was more about not able to make more profit and they threw their toys out of the pram.

Plymouth 10K for a lot of runners in the area is a special one, as for most it's their first race they ever ran, so when it got cancelled there were a lot of disappointed runners. However a few months a go, a company in talks with the local council soon opened the new 10K to get it up and running. Obviously this pleased a lot of runners, despite other good events on at the same in the area such as the good Cornish marathon and Drogo 10 miler. Despite the short notice, it soon filled up with 1600 runners, which wasn't too shabby for the time frame it was put together.

With the race starting at 8.30am, and club photo at 8am, it was going to be an early start to get into the city centre getting around the road closures and to find a spot to park before it got chockers. Grabbed myself a hot chocolate from the Costa machine in my local garage and off I went. It was dark, wet and miserable start to the day with the wind picking up slowly. Luckily I had already picked up my race number the day before from the Race HQ so I didn't need to attempt to do it just before race start when it was stupidly busy.

With the group photo out of the way, I was soon met by a friend who wanted me to get her round. Not that I thought she needed help, but as always I was pleased to help. It was her first race and first time to cover 10K, however I knew through training she was capable of doing it.

The start line area was soon buzzing, as they organised a quick warm up session for the runners, prior to the start. We soon gathered on the start line, with the announcements of some of the elite runners with Cornish ladies legend Emma Septo among them. Bang on time the hooter went and we were off, the event was chipped time, so regardless of when we crossed the start line, we'd have a time that reflected when we officially started and finished.

The course is pretty simple, and not the toughest 10K either, it's good for PB's although not entirely flat, I would say there is some gentle inclines that all throughout the course. From the start you head off down Royal Parade, where even at 8.30am the support was amazing. Out onto Exeter Street, down through Gdynia Way to Embankment. As this is 5k turning point, the support wasn't as plenty as in the city centre it's self but it was still there. Even in the miserable weather, the support kept cheering and clapping all the way through. Just after we turned round to head back there was a water station manned well by a local air cadet group, the route was well marshaled along the way also. The marshals were great and highly motivated as well which you like to see as a runner.

The route was headed back the exact route that you ran out in until you crossed the finish line, with the wind in your face it was harder going than it should've been. As you came in to the city centre there was even more support out, obviously the noise from the support at 8.30am start woke the locals up and they must have came out to see what all the fuss was. It was brilliant, I'm not going to lie. Once you finished you funneled out to collect your goody bag. For the first 10k from this company at short notice I can't really grumble to be honest. It was well organised, the goody bag had more in it than the bigger half marathon event that's held in the city. You even got a t-shirt along with the medal included in the price of this event. The goody bag wasn't quite as good as the more established Bristol 10K I ran earlier in the year however it was of similar cost which it was almost on par to a bigger mass participated 10K.

Would I run this one again? If it remained as good value and well run as this years, then yes I would. If it went towards the way the half marathon has gone, then no I wouldn't especially when there are two other good events in the area. I would recommend this 10K to first timers as it would set them great for future 10K times.


So that completes event 32 and since then I've also completed event 33 of 37 which was the "Poppy Challenge" in aid of the Royal British Legion. Another event done, and more miles for my friend Phil. I can't believe where this year has gone to be honest. It's flown so quickly and my body has taken a beating. My blogs have been nominated for an award so please if not for me but for the miles I've run for my friend give us a vote by following the link. The Running Awards vote here!

Until next time thanks for reading, and the continued support. 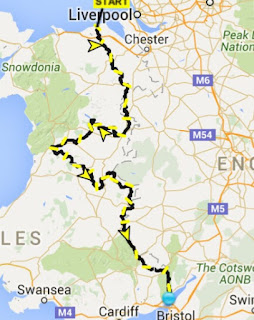