As we're now into 2016 first thing to do is wish everyone a Happy New Year! I feel it's a good time now to look back on what can only be deemed for me as a successful 2015. It's not been an easy one by far, but achieving everything I set out to accomplish regardless of any low points can only mean a success in my eyes.

The two goals I set my self for 2015 were to complete 37 running events by 31st December. I did this by 25th December when I finished event 37. The other and the main goal of the year was to complete the hardest challenge of my short running career. That was to complete 7 ultras in 7 days by being the first person ever to run from the New Forest (Southampton) to Land's End. It was an event I created to fit what I wanted to achieve around my work and family life as well as to help me raise awareness and some money for the cancer charity Orche. I achieved something that to me only prior to actually doing, thought was way beyond my limits.

I've been very lucky throughout the year with some great support from various runners including some who continue to inspire me to keep pushing myself. Here are some of those runners who inspire me and I recommend you check them out. 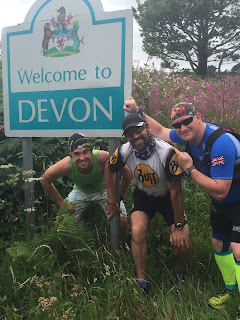 
I could go on to be honest with the list.
Heroes/ Legends/Inspirations in some form they all either supported me and or inspired me to do what I have accomplished so far. I can only thank them for doing what they have done for me.

So now looking on to 2016, I can tell you now it's no where as busy as 2015 in terms of number of events but it's still a reasonable busy year. I've 3 Ultra events planned in, these are Hope24, Classic Quarter and R.A.T "the Plague". 2016 is all about training and planning for the next big adventure in 2017 using what I've learned from 2015 and making sure I achieve my goal for 2017.

All those #milesforPhil were definitely worth the tears, the pain, the aches, the sweat and of course the smiles. As Phil is still fighting long past the time he was given I'm so pleased, he has been here to witness my efforts on behalf of him and others like him.

I'm still quite humbled by the continuous support people have given me and still continue to give me, it's one of the reasons I like to give back to the running community and support as many people as I can to those also challenging themselves be it getting off the couch and running their first 5K to those running the deserts and mountains in the big ultras. The fact friends and others have said I've inspired them to get out there is still amazing me because I don't set out to do such a thing.

I'm very lucky all this has been made possible by those around me including my wife and son, as well X-Bionic and Sunwise without their amazing kit making it easier for me, I know 2015 would've been much tougher than it already was.