When I entered this new event, I wasn't sure how recovered I would be from my recent adventure across Wales only two weeks prior, my body would be. So when it came to starting I wasn't 100% recovered but I was going to give it a go anyway.

The Madness of King George is a 12 hour running event set down in Cornwall in a town called Hayle. The course is 1.06 mile laps along the King George Memorial Walk. The out route was along the tarmac road which is closed to traffic on Sunday's and back along the gritty dusty footpath right next to the road. The two only separated by the odd bushes. 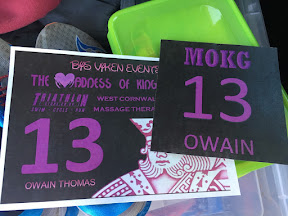 As the event got closer, I tried not to think about it too much, and just let what be happens. The weather was looking good and having parents who live down that part of the world allowed me to get a good night sleep without having to worry about a long travel prior.

The race was starting at 8am on the Sunday and we arrived just after 7am for registration and kit check. Kit check? Yep we had mandatory kit to carry even though it was just over a mile a lap. Why? Well it was one of the rules and it was designed to be annoying to make the event harder.

Other rules like - No leaving the course except for using the toilet or injury treatment. No drop bags or no pace runners. If you don't last the full 12 hours you DNF even if you stop at 11 hours 59 mind 59 secs.

Some time based events will allow you to have drop bags, etc and allow you to run as much or as little as you want. This event was no such event. But we knew that when entering and that's probably why only 15 of us entered. On the day though there was 1 DNS due to injury so 14 of us lined up. I was pretty lucky, I knew quite a few of the runners, so the event also became a bit of a run with friends. I was toeing the line with some pretty handy runners like Loyd and Kay from the At-Your-Pace Trail Team, as well as other local pocket rockets like Laura Milward, Sharon Sullivan and Mickee Jelf. They're bloody awesome people who kept smiling and miling (is that a word?) all the way around event.

Every time I got to the turn around point I made the point of tapping the top of the turn around cone. This to me was a mental thing to myself to say well done that's another turn around ticked off. It was the same as the cone at the start. I did it every lap at each end.

I decided I was going to get a few comfortable good laps in and see how it went from there. The course was flat (except for the speed humps) so there was no hills sadly. It makes the race game different to a hilly course for sure.

It wasn't long before the temperature rose, and we all started to fee the heat as we made our way up and down the course. You were never alone on the course, you either had someone on your side of the course or going to down the other side. Thumbs up were given or words of encouragement each time by all! That never stopped even in the darker periods (mentally) and that is just something that made the event special.


After about 20 miles my wheels started to come off in the heat and by 27 miles I was almost close to throwing the towel in. I'd would be wearing a Jesters Hat if I did DNF'd. So I decided I was going to sacrifice my target and get some treatment on my legs. They were very tired from recent events and with the heat also. So I got a massage that was provided for free. Boy was it needed! I had two people working on my legs so they could speed up the process.

I got back out there and god my legs felt almost brand new. They were no longer calling me a stupid twat and were back in the game. With my target mileage gone I decided just to go and enjoy as many laps as I could, just to keep going round and round.


Each lap got tougher and tougher as the heat continued. The marshals were superb, as you came through the finish of each lap they were offering all the runners food, bottle top ups, dunking their buffs in cold water etc.

I was lucky to have my wife on support for me, as we could have stuff given to us on course, she had my spare bottles so all I had to was swap them over so wasted little to no time waiting to get them filled up.

My wife who often supports me is just pretty amazing even if she gives me a lot of tough love on the courses.

Eventually the time ticked away and as we approached the last hour the temperature slowly started to cool down especially as the sun was no going down behind the houses on one side of the course.

The last lap soon arrived for me and I decided enough was enough. So I took my time getting to the turn around point and took a seat on a rock as I drank some water cheering on those going past. I made my way back and saw Loyd doing a similar thing on a bench so I sat with him as another runner joined us and we clapped those going past. We event did an arch for one runner. The three of us made our way back to the finish, 12 hours had finished and we were done. With our swagger on we crossed the line to the cheers and clapping from everyone who had finished already, the marshals and the supporters. Loyd had crossed the line as the winner, putting in a top 73 miles.

Me I had come last for the first time ever if you don't included the DNS entrant. I had managed just over 41 miles in the 12 hours. I can't be too disappointed though, if I was running on fresh legs, injury free I would have been go for over 50 miles and maybe pushing towards 100K. However it wasn't meant to be this time but I am not sad, I finished the 12 hours, and I enjoyed myself despite it being flat and tarmac. I was surrounded by some great runners, friends and family. What is there to be sad about?


For the first time of running this event, it went from my view on it pretty well. David the RD did a great job. Is it an event I would attempt again? Yeah of course, I only repeat events that are worth repeating.

So because if work that was my last event of the year. I will now be training for the Arc of Attrition 100 mile race next year. It's going to be interesting especially as most of my training will be done on a Warship at sea.

I'd like to thank Tailwind Nutrition UK for their continued support, it got me through a tough 12 hours.

My wife for being just an amazing support crew once again. I'm nothing with out her support.

So thank you for reading, until next time!