It's been a while since I blogged, and to be fair my running has been a bit lack lustre too, so it sort of went hand in hand.

2017 started off pretty well to be honest, I hadn't booked in many events because I wanted to give a little bit back to the family as they were spending a fair bit of time chasing me around whilst I ran.

The year started with the Cousin Jack Classic II race. A 17 mile South West Coastal Path (SWCP) race from Cape Cornwall to St Ives put on by Bys Vyken Events. Throughly enjoyed this little tough race. The section of the SWCP isn't easy to run on for various reasons, however that didn't stop me enjoying it. Click the link for the Blog Cousin Jack Classic II. My good friend David has put on some good events and I go on to do another later in the year.

The first big event I ran in '17 was Hope24. This was the 4th year I was involved with in some capacity. Again I helped set up and then ran solo once more. With weather interrupting us and it becoming a 17 hour race instead after postponement I didn't get as many miles in as I wanted. I did get to run/bimble alongside my wife for one lap which was great as it's something that doesn't happen often (sadly she twisted her ankle during her first lap but she did manage 3 laps with it strapped up in the end). Got a hug off fellow blogger and runner friend Sarah (see her blog here Sarah's Blog) so another bonus. She's great!

I was then due to run in the CQ44 again but sadly I couldn't run it this year. Not disappointed as I had run it before.  Soon enough I was getting myself ready for the biggest event of the year. The big adventure where I was to run from North Wales to South Wales via the Offa's Dyke and Glyndwr's Way then the following day after I finish race Mudcrew's "The Plague". It wasn't a complete failure in fact I still achieved from it. It just didn't go the way it was supposed to go. But then that's life really, It wasn't out of my depth, just things didn't go to plan and I had to adapt, improvise and over come. I still raised a lot of money which was the main goal. It gave me some amazing experiences and some fantastic memories. Like all my other adventures and races, I also learnt lessons to take forward. Here's the YOLO blog YOLO 17 and the Plague blog The Plague . 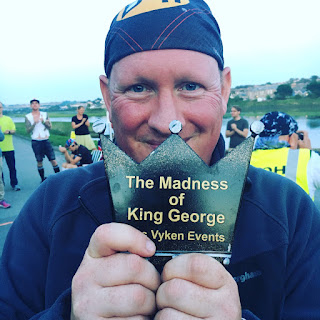 2017 also allowed me to host my first guest blogger. I was approached by a publicist to see if I would host an author who's book was about to launch. As he is a runner and it was about his record run around the Wainright's Round, how could I say no? It was good to do and I enjoyed his book to which I can highly recommend. Here is his blog There is no Map in Hell part 3 .

2017 also brought me some major downers as well, first of all there was a group set up to slag me off behind my back. Worse of all it set up by someone who was supposed to be a friend. They tried claiming it was "Banter" sorry it's not when it's behind someone's back. Then I got accused of cheating because Strava amended some of my race times and it made me look like I was an Olympic Athlete. Without talking to me about it went and started slagging me off at my local running club, and this then went out in public. I've never cheated, I've never amended any runs. I'm not exactly trying to win anything and my performances that are all noted down in the results show I'm not great. Why would I want to cheat with mediocre performances really? My Garmin files show nothing was amended. it just shows the type of people they are really. Especially fi they thing Strava is the be or end all. Then an American Running forum "Let's Run" (I'm not even a member of it) on a thread to do with another British Runner, I get mentioned (because I commented on the other runners FB status) as "too thic to be an ultra runner" Thic is urban slang for fat. Yes I am not a racing snake I know that. But body shaming is never on in my books. The recent "This is Me" song from the Greatest Showman film says it all really.

So as you can see a real mix bags for 2017 for me. 2018 hasn't started off well, I've had to defer my Arc of Attrition 100 mile place to 2019 due to now deploying. Sadly that is the way things go in my line of work. At least it give me even more time to get prepared for it, I am already looking at races at the places I am going with work and found on already so silver lining and all that.

I am looking forward to my running overseas, and I'm starting to plan my next big adventure run!

Thank you to all my readers, my wife and son and my sponsor Tailwind Nutrition UK!

Look out for my up coming blogs of my overseas runs.